CEO Joel Atakora is the founder and manager of the translation agencies Lalawele-Translation. After studies at various universities International - as the Universitť du Bťnin (study of the German language / literature) and the study of Germanic / Romance Philology at the University of Hamburg (with the academic grade "Master of Arts") - he does deal with this service in the area of languages and linguistics as self employed. He has been mediator and translator for various European authorities. He was interpreter for French, German and English at the Zurich cantonal police, at the Hamburg criminal court and translator for investigating authorities in Hanover. Besides he proved as World Cupīs Service Ambassador of Hamburg City his big lingual talent during the football world cup 2006 in Germany, when assisting together with other employers of the Hamburg Touristic Company thousands of tourists in French, English, German and Dutch. He was also tourist guide for many travel agencies in Africa. Joel Atakora was engaged on the private level for many years for intercultural theatre and cultural projects, as well as for poetry and won, inter alia, for his essay on the importance of Goethe in and for Africa with the Goethe - Price Awards (for the first time awarded on the 250th anniversary of Goethe). 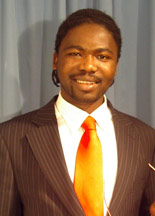